International Community of Social Identity in Sport and exercise

After having attended a friendly football match between Chelsea FC and DC Dynamo Moscow to mark the end of World War II, the novelist George Orwell (1945) famously remarked that sport “is war minus the shooting.” Even if one does not agree entirely with this characterisation (which he based on the fact that it is “bound up with hatred, jealousy, boastfulness, disregard of all rules, and sadistic pleasure in witnessing violence”) you have to concede that he had a point. Stated less controversially, this is that sport is an intense activity that routinely centres on passions that arise in the context of competition between opposing groups. This passion is what motivates us to watch it, to take part in it, to enjoy it. It is also what makes it special.

Yet given the importance of this group-based passion, it might come as a surprise to the person who comes upon the field of sport and exercise psychology for the first time that this field pays no special heed to the importance of groups and group life for the mental states and processes of those who watch, run, and take part in sport and exercise. Certainly, there is work on group dynamics and group cohesion, but in all this the group is seen as external to the person rather than as having the capacity to be core to their being. As a result, this branch of psychology tends to be focused firmly on the “I-ness” of the athletes, coaches, administrators and spectators at the centre of the sporting world — their individuality and their sense of themselves as individuals. Although there is an immense amount to be learned from such an approach, its core problem — and its huge blind spot — is that it does not allow us to understand the sorts of processes that Orwell observed being played out at Stanford Bridge. After all, as Henri Tajfel (1978) observed, it is not “I-ness” that makes people go to war but “we-ness”. Moreover, sport as a whole is shot through with this sense of we-ness — the we-ness that derives from being, and defining oneself, as a member of a group (e.g., a team, a club, a profession). Indeed, we find this we-ness at its very heart. So, if we overlook this, then we overlook something that makes sport, well, sport.

In very simple terms, this book is an attempt to remove this blind spot. More particularly, it takes ‘we-ness’ from the periphery of sports and exercise psychologists’ consciousness to front and centre of our analytic gaze. Moreover, it is this that makes the psychology we explore “new”.

Of course, in calling something new, one is always open to the charge that there is nothing new here at all. In one sense this is correct. After all, we are not saying that the psychology of sport and exercise has somehow changed in recent years (i.e., what goes on inside people’s heads). Groups and their psychological impact have always been central to these endeavours. This, for example, was something that Aristotle acknowledged over 2,000 years ago when he observed in his Nicomachean Ethics that:

In order to feel goodwill for a contestant at an athletic competition, a spectator must sympathetically share his pleasure in the sport and his eagerness for victory. (Pangle, 2002, p.49)

Our point, then, is simply that psychologists have never before taken especially seriously the task either of understanding what underpins this sympathetic sharing of perspective or of understanding why it is so important for sport and exercise outcomes. This book does. In particular, it does so by focusing on the capacity for psychology to be shaped by social identity — a person’s sense of themselves as a member of a social group (which can be contrasted with personal identity, their sense of themselves as an individual; Turner, 1982).

However, it needs to be said that this focus on social identity is not new either. Since Henri Tajfel and John Turner first wrote on the subject in the 1970s, the theoretical framework they set out has inspired a vast body of research in fields of social, organizational and, more recently, health psychology. As a result, there are dozens of books and around 15,000 publications on the subject (see Postmes & Branscombe, 2010, for a discussion). Strangely, though (and for reasons that are not entirely clear), over most of this period the field of sport and exercise psychology remained largely immune to these influences. This meant that while there were some excellent publications that examined sport psychology through a social identity lens, these remained isolated dots that were rarely joined together into an integrated whole. So while the first paper on social identity and sport was published 30 years ago (Wann & Branscombe, 1990), as Figure P.1 indicates, it is only in the last five or so years that this line of work has really gathered momentum.

Figure P.1 The exponential rise of research on social identity and sport 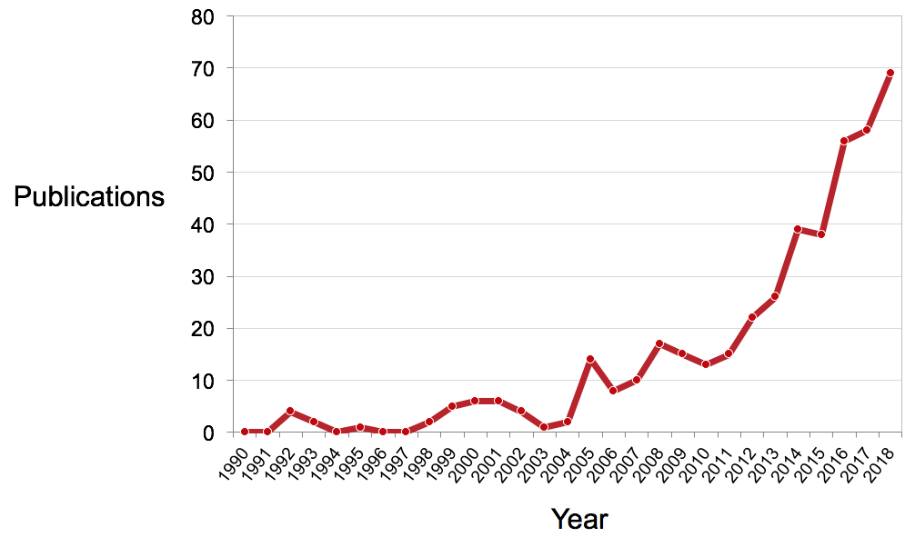 What changed, and what provided the inspiration for this volume, was that over the course of the last decade groups of researchers and practitioners around the world started collaborating on a range of projects that looked to tell the ‘bigger story’ of social identity and sport. In 2013, this led Pete Coffee to set up the Social IDentity in Exercise and Sport (SIDES) network as a first attempt to create a body that might share and promote the results of these collaborations. This in turn provided the impetus for the three of us to think about trying to bring these researchers together to share their data, their ideas, and their visions for the field. The result was the First International Conference on Social Identity and Sport (ICSIS1) held in Leuven, Belgium in July 2017.

Two things surprised us about this gathering. The first was the amount of interest it generated. We had expected around 20 people to attend but in the event 65 turned up — coming from 15 different countries to listen to 37 presentations (see Figure P.2). The second surprise was the amount of energy and enthusiasm that the conference generated. Rather than being a procession of dry empirical offerings, the presentations — and the discussion they stimulated — was lively, exciting, and fresh. And in the wake of this, the proposal for this book was conceived.

Note: Held in Leuven in July 2017, the conference was organized by the three editors of this book and brought together 65 researchers (42 of whom are pictured here) from 15 countries 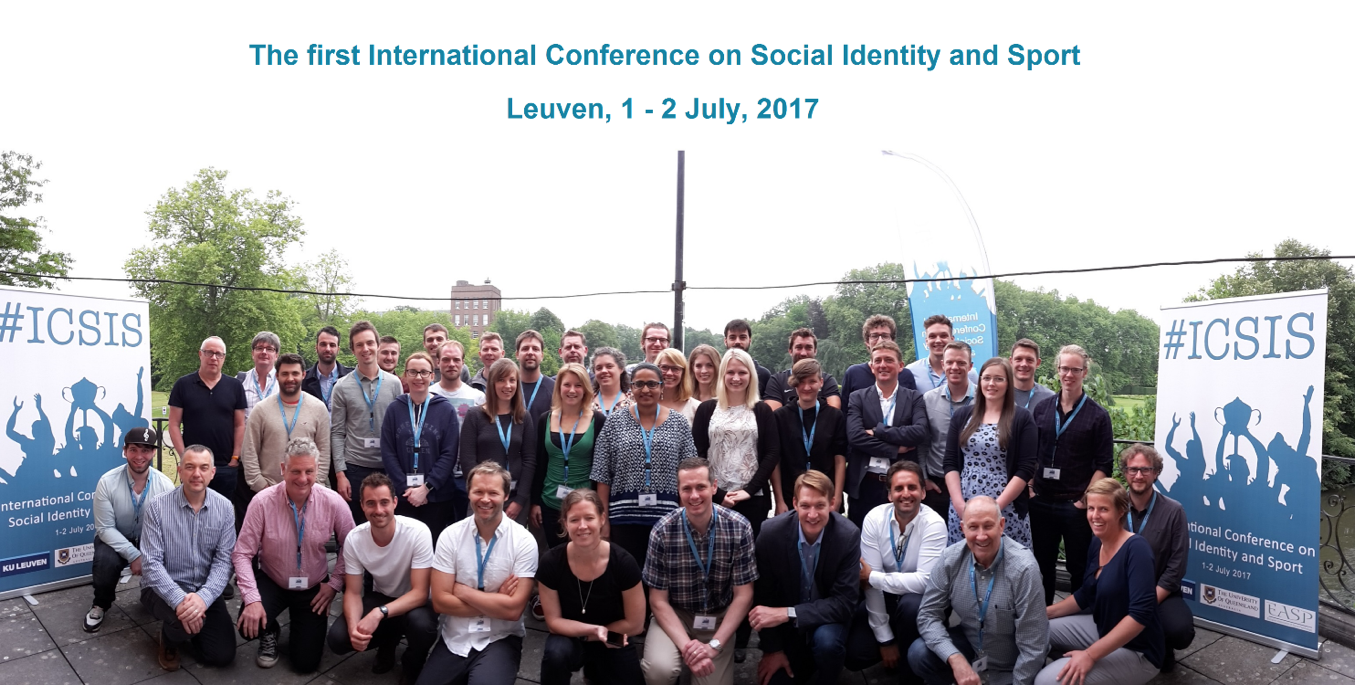 Going forward, it was decided that ICSIS would be established as a bi-annual conference and that the royalties from this book would support this into the future. True to this, the Second International Conference on Social Identity in Sport (ICSIS2) took place in Stirling, Scotland in June 2019. Organized by Pete Coffee, Chris Hartley, and Nina Verma this brought together 62 delegates to discuss 35 presentations and proved to be every bit as inspiring as the inaugural event. Not least, this was because ICSIS2 provided an opportunity to showcase the wide range of ideas that form the basis for the chapters below. Plans are now in place for Simon Kawycz and colleagues to host ICSIS3 in Liverpool in 2021, and prospectuses for subsequent meetings are taking shape too.

Ultimately, then, this book is a testament to the spirit of these conferences that bring together, and galvanize, a broad swathe of researchers around the banner of social identity and sport. Our goal in producing the volume was to capture not only the rigour and vigour of these meetings, but also the fun and excitement that they generate — the Wordsworthian sense that “bliss [is] it in that dawn to be alive”. The ultimate proof of this, however, is something that can only be gauged by the efforts and enthusiasms that this book inspires in you, the reader. Accordingly, we look forward to hearing — and writing — about these in the future.

The particulars of the above history mean that the first people whose input into this volume we need to acknowledge are the many people who contributed to the first two ICSIS conferences and helped to make them such a success. Many of these are authors of the chapters below, but there are also other researchers who we asked to contribute on the basis of their expertise on specific topics that we would like to thank too. In particular, we are grateful for the fact that all the contributors to the book worked tirelessly to produce multiple revisions of their chapters with a view to realising our shared ambition for this volume — namely to provide a comprehensive and compelling statement of the social identity approach to sport and exercise psychology.

Alongside this, though, we would like to thank the editorial staff at SAGE for their unfailing encouragement and support over the past three years. From a large and extremely capable team, Becky Taylor (who first commissioned the book) and Amy Maher (who oversaw its long journey to press) deserve to be singled out for their patience, industry, and generosity of spirit.

Finally, though, we would like to thank our partners, families and colleagues for their forbearance and good humour over the extended period of time that it has taken to bring this book together. To paraphrase Kareem Abdul-Jabbar, it is not the person that makes the team, so much as the team that makes the person. We count ourselves very lucky to be playing on yours.